This year, winter in Huntsville, Alabama has been rather uneventful. Then came Feb. 25 and 8.1″ of snow, the second snowiest in the city’s history, according to the National Weather Service. While the roadways were deserted, Huntsville neighborhoods were buzzing with wintry activity. Residents came out in full force, dressed as appropriately as possible, to celebrate. As a Minnesota native, even I can appreciate the occasional snowfall, knowing it will be gone within a matter of days.

Our daughters, Serina and Sophia, were among the kids who embraced the flurries. Along with their friend, Abagail, they ran around in the snow as it continued to fall Wednesday night. By Thursday morning, they discovered the drifts and the dance was on. 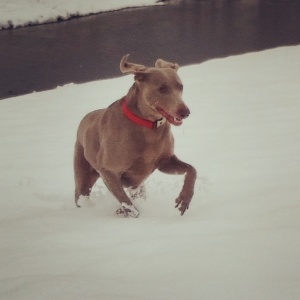 I managed my usual 5-mile walk-run along the Greenway with my dog. That’s my kind of fun. Zoey’s, too. Upon my return, it was all about the kids.

We eventually tried building a snowman, but by then the temps had risen into the upper 30s and the snow was damp and heavy. Even so, Abagail and Serina persevered, eventually completing their “snowgirl,” Lucy. It was a far cry from the giant snowman someone built around the corner, but the girls were perfectly happy with their creation. The girls also welcomed our young neighbor, William, into the snowy mix. Looking quite dapper in his blue snowsuit, this sweet guy quickly captured their hearts, especially Serina’s. 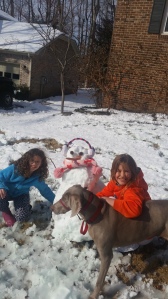 Playing in the snow is great exercise so after a good hour or two, we’d had enough. It was time to throw our clothes in the dryer, eat chicken noodle soup and seal the deal with a good cup of hot chocolate.

After about 24 hours, most of the sensational snow had already turned to slush. Next week, temps in Huntsville are expected to hit 60. By then, Snowmageddon 2015 will be a distant memory, captured in a few photos that we’ll admire while sitting on the back deck in our shorts and t-shirts. Just the way we like it.

I'm a Minnesota native with an Alabama heart, reflecting on the past while looking toward the future. My husband, David, and I landed in Huntsville in the late 90s through my former career in TV news. We have two amazing girls, Serina and Sophia, whom we are raising with God's guidance and grace. Besides faith and family, my passions include writing, walking, recovery, and the outdoors. By day I'm the Director of Development for WellStone, Inc., North Alabama's largest and most comprehensive mental healthcare provider.
View all posts by minndixiemom →
This entry was posted in Ala., Family, Running, Southern living. Bookmark the permalink.

2 Responses to Fun and Flurries: Snowmageddon 2015