For about two hours, I almost thought I was back in Minnesota. At first, sleeting rain, followed by tiny pellets of hail, and finally snow. Big, fat, beautiful flakes.

Huntsville City Schools and surrounding districts made the call to close early. Elementary schools, including the one my daughters attend, would close at 12:30. That meant I would be going home early, too. 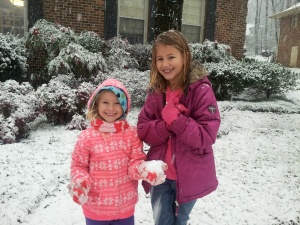 Sophia, left, and Serina enjoy a partial “snow day!” It’s a far cry from the months of snow we endured living in Minnesota, but definitely pretty… for a brief spell.

Now, if I were really in Minnesota, school wouldn’t have let out early. The Rocket City was only getting an inch or so, but (insert fake and exaggerated southern dialect here:) Y’all might be used to this nonsense, but we southerners aren’t accustomed to driving in such hazardous conditions.

On the way home, the salt trucks were out in full force, hitting the overpasses, which typically are the first to close when the threat of black ice looms. I drove with caution, as (thankfully!) did many of the motorists with whom I shared the road.

I live on a steep hill and hadn’t anticipated a problem, but it was icy and my Pacifica struggled on the incline. Alas, I made it. But there was a Mercedes parked outside our house. Apparently, the folks who lived at the top of our steep hill had to stop and walk the rest of their way.

While many adults were annoyed at the snowy, messy inconvenience, the children were in awe. That’s when I took a moment to appreciate the falling white that transformed our south Huntsville neighborhood into what appeared to be the scene of a beautiful winter snow globe.

The car had barely stopped when Serina and Sophia tore out of their seatbelts. We met neighbors playing outside that we hadn’t seen for months, and even met a few new ones. Serina and Sophia joined several other children for snow angel fun (kind of lame snow angels with an inch or less of snow!), snowball fights and even a game of “let’s see if kitty likes the snow!” (She didn’t.)

The snow is pretty for now, but I am sure it will melt before it has a chance to turn dingy and gray. It’s hard to believe we enjoyed 60s earlier this month and now we’ve got snow. Who knows how long it will last. The children hope it will last a while. Me? I’ll be ready for the sun to melt it into a memory by the weekend.

Then I’ll remember, I’m not in Minnesota anymore. I love the people—and the summers—there. But the long winters, which are appreciated by many northern winter-sports enthusiasts, are not really my thing.

Which is why we moved back to Huntsville in the first place!

I'm a Minnesota native with an Alabama heart, reflecting on the past while looking toward the future. My husband, David, and I landed in Huntsville in the late 90s through my former career in TV news. We have two amazing girls, Serina and Sophia, whom we are raising with God's guidance and grace. Besides faith and family, my passions include writing, walking, recovery, and the outdoors. By day I'm the Director of Development for WellStone, Inc., North Alabama's largest and most comprehensive mental healthcare provider.
View all posts by minndixiemom →
This entry was posted in Family and tagged Snow, Snow Days, Southern Winters, Winter Sports. Bookmark the permalink.